Chinese food has always been a cuisine I’ve ordered when passed out on my sofa, having hardcore crispy duck and hoisin sauce cravings. I’ve locked the art of what I order down to a tee, and saved it for a quick, ‘one button order’ option on my takeaway app.

The thing is, I love cooking – but I don’t think I’ve ever cooked proper Chinese food. Like, ever. Mine usually comes out of a packet from Sainsbury’s or M&S. Now this confuses me since I bloomin’ love cooking! My default culinary skills are definitely Indian dishes (see my recipes section) but I love eating everything, and so one fine Wednesday lunchtime I toddled down to The Cookery School in Great Portland St for the launch of Ching He Huang’s new Lotus Wok with the peeps at JML.

I arrived, signed in, spied on Ching prepping in the kitchen, did a bit of networking and then awkwardly stood near the canapés – waiting for someone else to eat one before me. I nearly went straight in for a spring roll but then realised I was ruining all the other bloggers and journalists’ #FoodPics. Whoops! That’s a food blogger cultural faux pas right there. 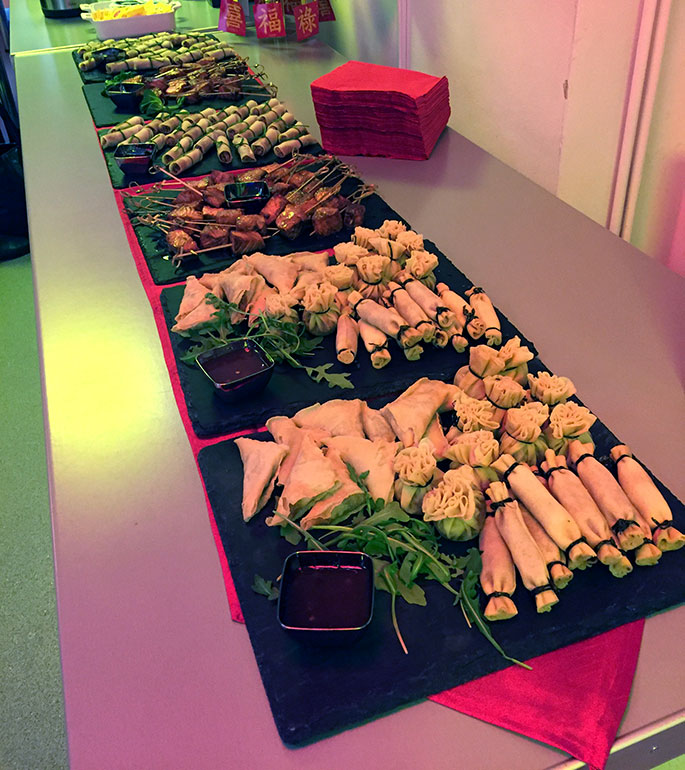 The JML folk were incredibly friendly and super-welcoming. We instantly got chatting about my lack of Chinese cooking experience. They then encouraged me to be the first person to dig into the canapés, so after I got the green light it was hard to move me from that table. In fact I stayed there right up until the point it was announced Ching was ready for her live food demonstration.

So what did I learn from my day other than the art of eating canapés at events? What bits of wisdom can I bestow on other Chinese food cooking virgins?

More often than not, takeaway is not representative

I watched Ching cook some incredible food, and after tasting it, boy-oh-boy was it good. I’ve had a chance to flip through her books and admire her whilst she’s on the tellybox and conclude this: Chinese takeaway is definitely NOT a true depiction of what Chinese food is actually like. Bright orange sweet and sour chicken balls are not, and should not be what comes to your mind when you say ‘Chinese food.’ If it does, then this saddens me since so much of the cuisine is about using the freshest ingredients and on the whole, producing healthy meals.

I’ll admit it. I had no clue what the difference was between light and dark soy sauce. I honestly thought it was like diet coke vs. the regular stuff. Turns out, I’m an idiot and that’s not the case whatsoever. As Ching cooked for us she explained that light soy is generally used for seasoning, whereas dark soy is used mostly for marinades – although she likes the dark flavour so she occasionally adds a tiny bit towards the end of her dishes. Doing so will also give a beautiful colour to the food. How did I not know that before?! 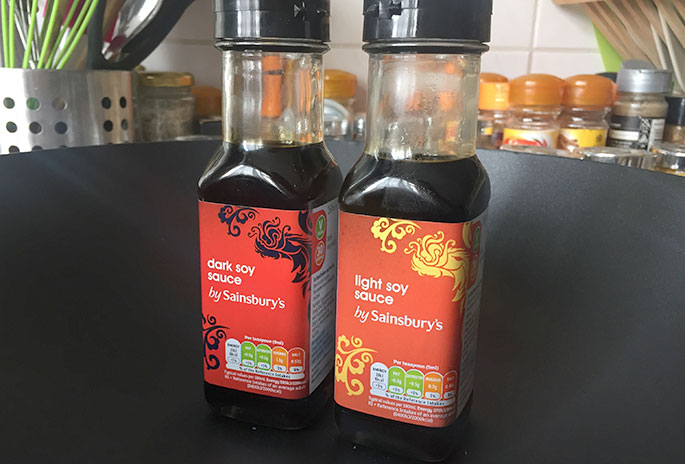 Keep that veg crunchy. Very crunchy, for this is the part that can turn your Chinese cooking attempt into a disaster. There’s a couple of ways you can avoid this from happening. Firstly, make sure you have everything prepared before you start cooking. Get the vegetables washed, drained and cut. Get the meat cut up and marinated (if you want) and have any sauces you’re using prepared. By doing this step you’re ensuring you don’t over cook anything! Secondly, when you stir fry veg, cook the toughest and thickest vegetables for a longer period than the softer, leafier veg. For example, ingredients such as broccoli, cabbage, and carrots need to be cooked longer than bean sprouts. After cooking if you think the veg looks slightly undercooked – it’s probably not! 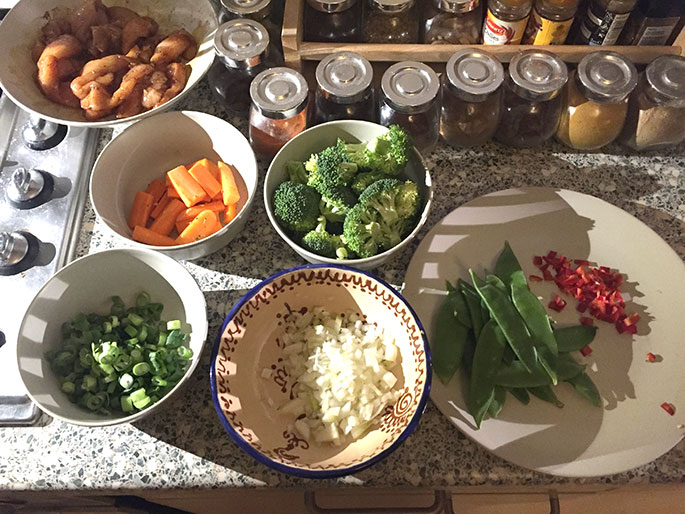 To Wok or not to Wok?

You don’t need a wok to create a decent Chinese meal, but if you don’t own one I certainly recommend it – especially since it’s the most versatile pan I own (also great with curries). In fact, let’s break it down. Wok’s have several advantages. They spread heat evenly, they use less oil if you’re planning on deep frying, the sides of the pan are higher which means you can toss your food, giving it a big shake and mix, not worrying about making a mess. The non-stick material also means food just glides off and it’s super easy to clean. Then there’s the question of whether you buy a wok with a flat or round bottom? I’m not just asking because I like the word bottom, there’s genuinely a difference. You see, if you’re cooking with an electric stove, use a flat bottom. Round bottoms can reflect heat back onto it, thus causing damage. A flat bottom can be used on gas stoves too, so basically what I’m saying is just buy a flat bottom cos those bottoms work with every oven. The Lotus Wok has an exceptionally beautiful flat bottom, comes with nano silica coating and is very sturdy but not painfully heavy like some traditional woks. If you’re looking to get one, Ching made a good’un. Note: DON’T PUT YOUR DIRTY WOK IN THE SINK AFTER COOKING AND LEAVE IT DAMP FOR DAYS.

It will rust. You will cry. 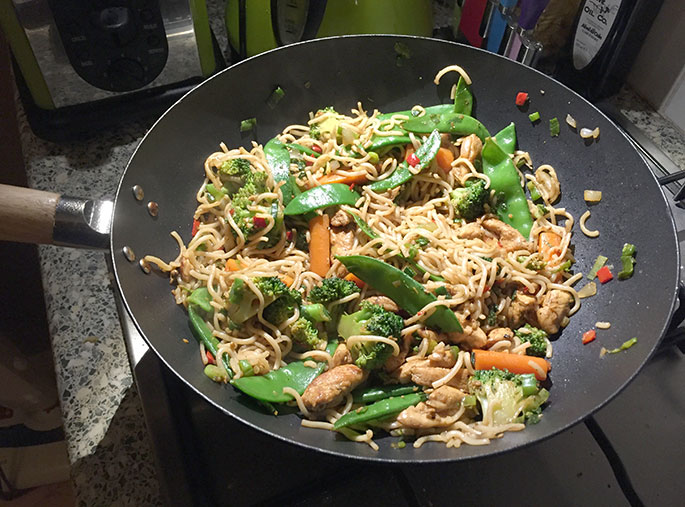 I don’t know about you guys, but I have never steamed chicken. I’ve pan fried it, I’ve baked it, roasted it, put it in a stew – the whole shabang, but never have I steamed. Seems I’ve been missing out! Ching highly recommends this method as steaming is an ideal way to cook chicken breasts to their full potential. It holds in all the delicious flavour, and keeps it tender and juicy with moisture. The Lotus Wok is sold with a steaming rack that sits within the pan, suspending any food or veg above the water with a large tight lid. I gave this a go, and am now officially saying goodbye to overcooked, dry, chewy chicken. I always manage to overcook it when pan frying but now, those days are over. If you do choose to pan fry though, remember to butterfly the chicken breasts. Seems pretty obvious, but butterflying will reduce the cooking time substantially. 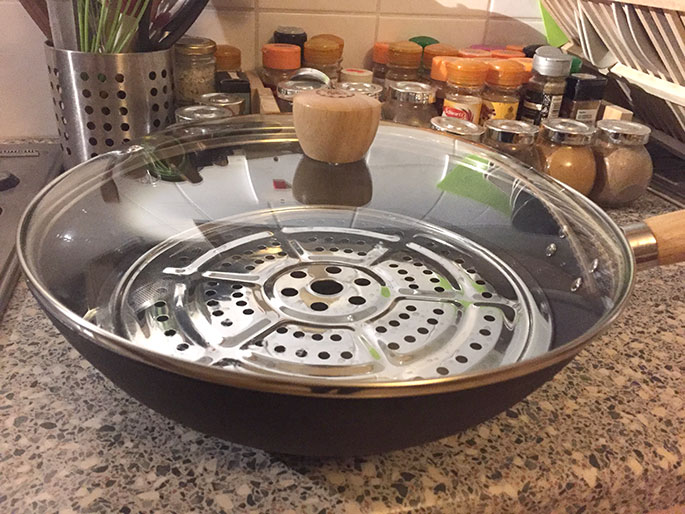 Garlic and ginger are good for the soul!

I knew this already, since these two elements feature regularly in Indian food too but it can never be stressed enough. These simple ingredients bring out big flavour from even the quickest of dishes. After playing around with my wok, making Chinese food this week – it’s obvious that you can make an easy peasy stir fry within 5-10 minutes, but it’s the garlic and ginger that completes it. Oh, and don’t use the powdered rubbish. Remember, fresh is best! 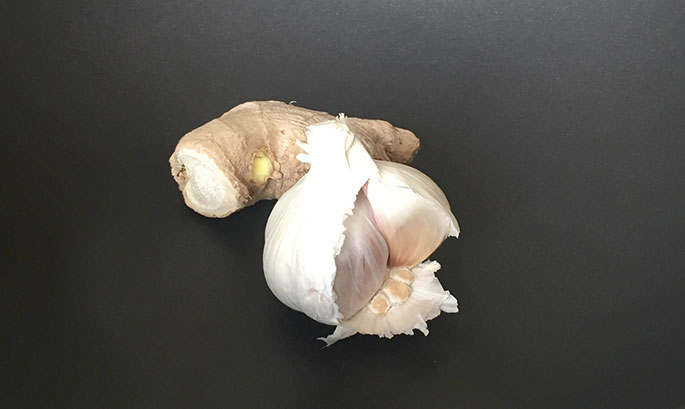 So thank you Ching. Thank you for showing me the beauty of Chinese food outside of my local takeaway and spreading the cooking love. I can’t promise I won’t order Chinese takeout in a hungover state, whilst I lay in bed with a headache ever again….. BUT I will hands down be cooking Chinese dishes a hell of a lot more.

Before leaving, I couldn’t help but ask Ching what the most ‘So Wrong It’s Nom’ dish was that she had either made or eaten before. What two ingredients had she accidentally paired that turned out to be pure joy?

Nom. I think. I’ll give it a go and report back, but for now – have a wokking good week and let me know of any good Chinese recipes I should be trying!