Comté has long been a favourite cheese of mine, and so I jumped at the opportunity to learn more about it.

Check out the video I made of the entire journey:

Lucky for us, our trip to the lush, green Franche-Comte region was headed up by the one and only Jean-François Marmier, also known as: Taz. He grew up in Jura, where his family have been involved in cheese making for as long as he remembers. But, it was his brief time spent in Tasmania that ended up earning him a nickname that stuck.

Taz on his farm!

As a milk farmer, getting Taz’s perspective on the production of Comté cheese was invaluable. We didn’t just learn the specifics of how the cheese was made, but everything that happens as part of the chain, from the milk production to distribution.

The cheese has PDO status (Protected Designation of Origin) which means it can only come from the Jura region, only use milk from Montbelliarde cows, only use raw milk during production and must be aged for a minimum of four months.

I found it fascinating to learn that Comté cheese belongs to the people – the cooperatives of farmers and cheesemakers setting a strong example of what collaboration means. The process goes from the hands of the dairy farmers and cheesemakers, to the affineurs (they age and refine the cheese). They are a cooperative because of the amount of labour involved. Many farmers pool their resources and milk together, and then to ensure the character is preserved, the cheese makers only use milk taken from within an eight mile radius from their fromagerie. 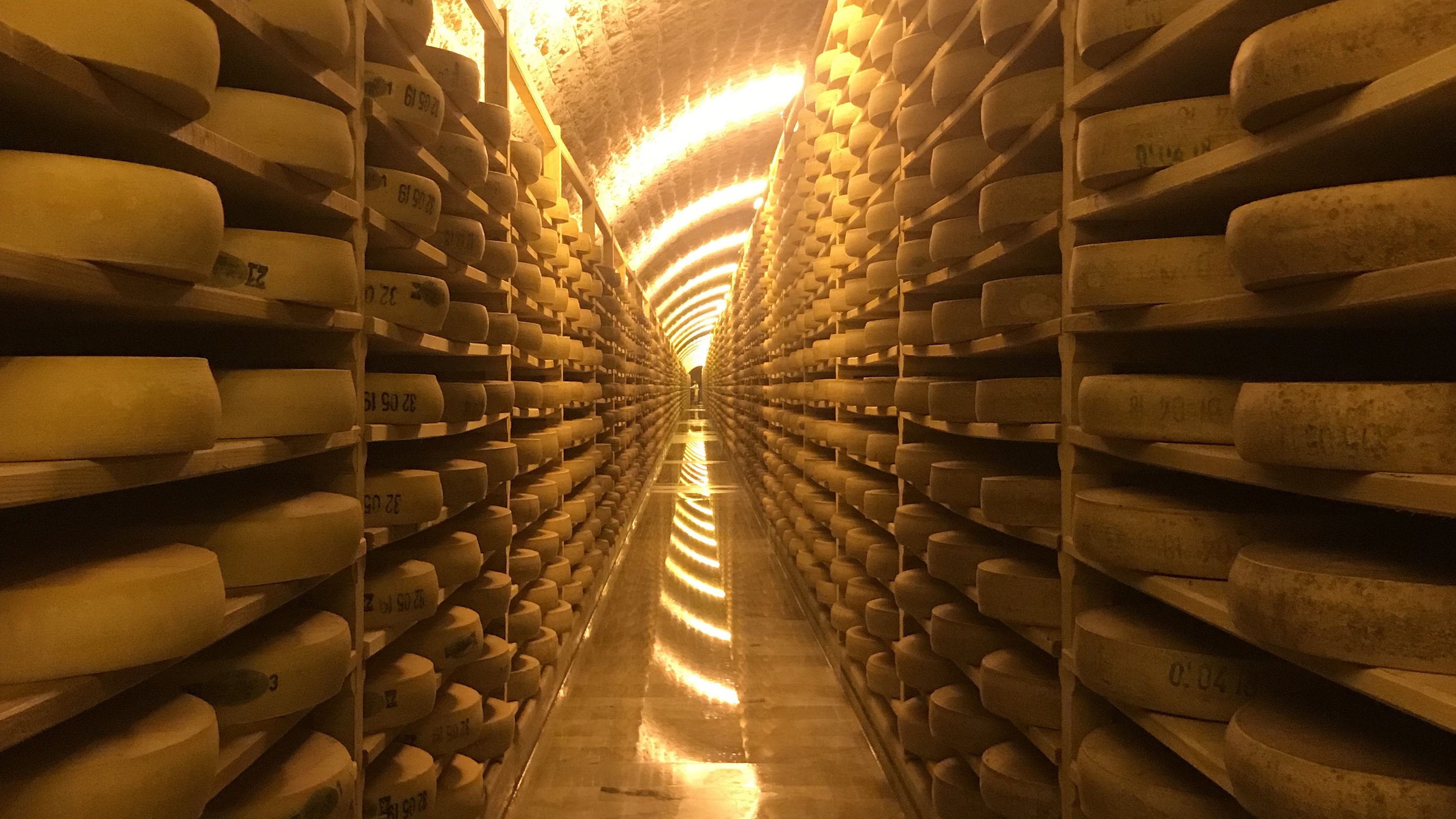 Finally Comté’s maturation takes place in dark, damp caves. They are lovingly brushed and taken care of by the affineur and this part of the process is essential to giving Comté its complex flavour, texture and more. An affineur has to be pretty experienced to make the most of the environment, knowing how to handle temperature and humidity as the seasons change.

Hands down, I LOVED hanging out with the cows so much. Feeding baby cows by bottle was the highlight of my year, and it was incredible seeing first hand, how much love the farmers have for their animals. Taz seemed to have his own language with the cows entirely. He made sort of clicking, chirpy noises to them every now and again and whilst I might have been going mad, at one point it truly felt like they knew who he was. Taz can add “cow whisperer” to his job title… 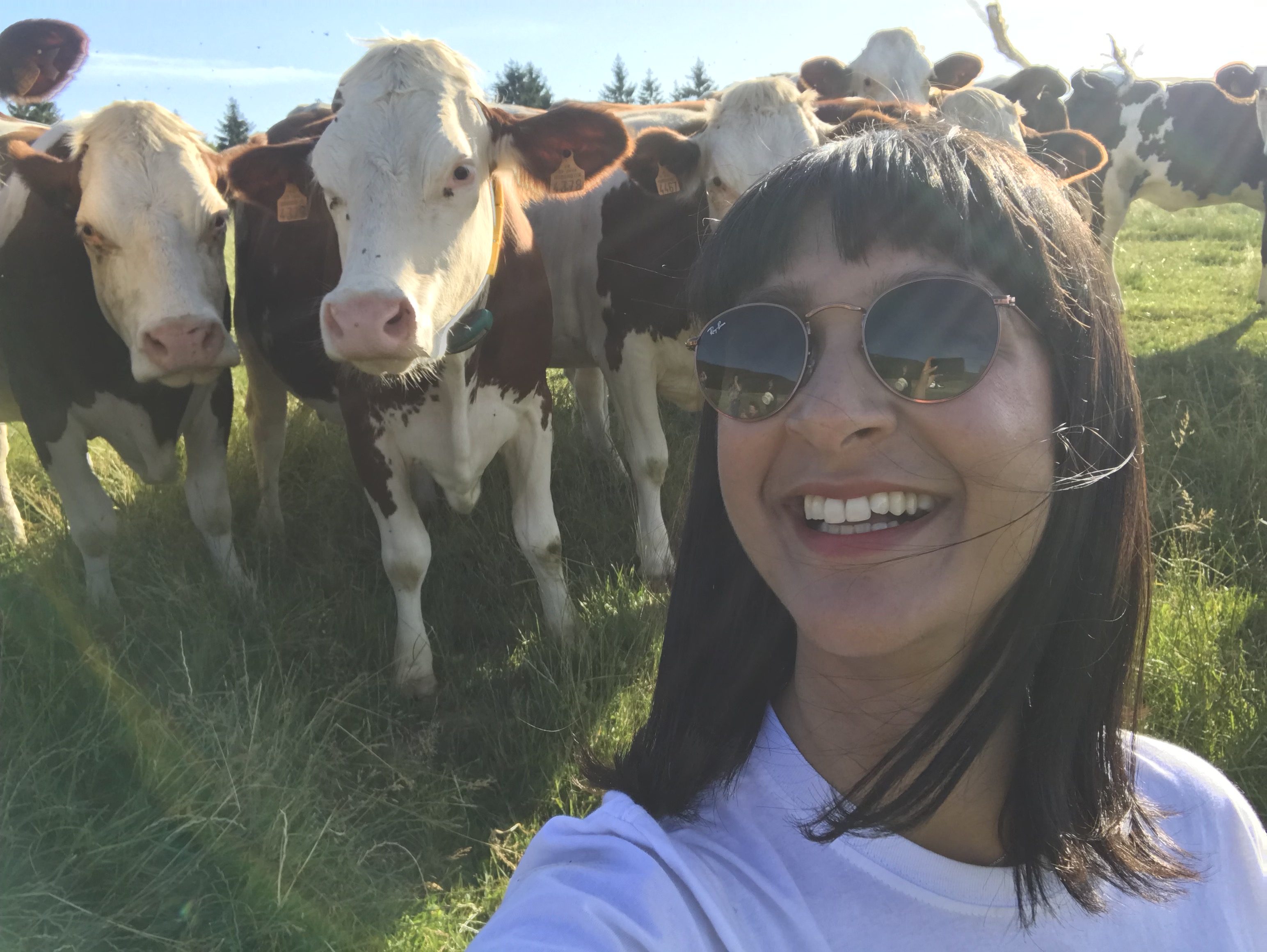 Me enjoying my time in Jura with my friends, the cows!

Each cow enjoys at least one hectare of natural pasture and in the warmer months grazes outside on grass, flowers and other unique flora. They are only housed inside during the winters and then, the cows are fed on hay produced on the farm during the summer. This ends up affecting the flavours of each round of Comté making them all distinct. Summer milk can give you golden cheeses with rich, earthy flavours, while winter milk gives you different undertones entirely.

“Difference is celebrated with Comte, not uniformity.”

This Jura trip was one of my favourite food educations to date, and not just because we were eating one cheese fondue meal per day. It was incredibly eye opening to see the amount of work that goes into the things we eat. So often we take it all for granted.

Of course, I came home with a mountain full of Comté and spent the entire month putting it in nearly all of my meals.